It’s been close to two weeks after the NYC marathon and I still don’t know how to put everything that has happened into words. The feelings of pride, happiness, sadness, determination, and emptiness still lingers. The love outweighs the negativity but I can’t help and feel slightly upset about how this training cycle concluded. Lots of factors went into the back-to-back Chicago and NYC marathon races and I can only learn from the experience.

I’m not sure how I did what I did last year, considering I feel fitter and stronger this year. A week before the NYC Marathon, however, I felt an intense pain in my right inner thigh, very close to the groin. I then took a few days off to rest well which halted my training, but I was suppose to rest and taper anyways. I was four miles into the NYC Marathon when I felt a slight pull and feelings of pain again. It was then that I knew that I had to slow down because it would be a tough marathon.

But, injury aside, I didn’t feel prepared for NYC. I don’t believe I lost any fitness from the Chicago Marathon which was about 4 weeks prior to NYC. Now that I had time to think about it, I was disappointed about how the Chicago Marathon unfolded and I was afraid of repeating the same situation in NYC. Luckily, because I went through it just recently, I felt better about failing this time around.

I had two Boston Qualifying races about one month apart, I ran with a bigger Queens Distance team, I saw many friends and family along the course, and I was able to share this marathon experience with my father who ran his first NYC Marathon. All of that made this NYC Marathon my favorite marathon yet. It was an incredible feeling to go through all of that in a span of a few hours, a fraction of which was the actual race.

Father and son ✌🏼️ Both Local Competitive 💪🏼 We trained hard, earned our spots, and now it's time: TCS NYC Marathon!🏃🏻🏃🏻 Not many can say that they will run a marathon with their father and for that I'm truly grateful. #likefatherlikeson #queensdistance #tcsnycmarathon #marathoners #fam #😭

My team set up another bus shuttle ride to Staten Island this year and it was a sleepy joy to meetup with teammates and other runners all going to run NYC, either again or for the first time. Being surrounded by first timers made the trip uneasy because I caught their nervousness but later regained control. After unloading, some of us headed to the Local Competitor area which now had so many Queens Distance runners. My father was with me this entire time and he was in awe about everything, especially since I kept telling him about everything that was around us. That truly made the experience amazing; how many can say they started off the NYC Marathon with their father?

The race started off well though it might’ve been faster that what I wanted to start off at. As I mentioned above, the slight pain at mile 4 made me settle into a steadier pace. Everything was going well and I was really enjoying the crowd. I pinned a small Mexican flag on my chest and I kept hearing “vamos Mexico!” which really filled me up with pride. (Note: I should really try adding my name next time.)


After the halfway point we were in Queens where I saw so many friends cheering either at the Mile 14 water station, in the streets, or at the mile 15 Queens Center for Progress cheering station. And then, it got lonely and painful. I started the slow and long trek up the Queensboro bridge and about a fourth of the way up, I was starting to get really tired, and this was with me slowing down. My heart rate just spiked up and I was working way too hard. It was around this point that Marie tapped me on my elbow as she sped on in front of me. It was great seeing her there and hoping she’d have a good marathon.

I soon after regain composure when I made it to 1st Ave. where one of my coworkers was waiting for me but I didn’t hear him! Going up 1st Ave. was tough, especially when I felt I was going at a steady 6:30 pace but was actually closer to 6:50 pace. That 20 second pace difference is very noticeable at this point as you’re tired but want to keep pushing. Fine, not a big deal, just need to keep running and make it at least past the Bronx; if I get back to Manhattan on 5th Ave. in one piece I’ll be happy.

I have a clear image of the first moment I stepped into the Bronx. During our training runs we run on the pedestrian side of the bridge and so we never get to run on the actual course. So as I stepped into the Bronx I now have this image of the first left corner and seeing a huge crowd waiting for us. The Bronx is mentally easily as I know all the turns very, very well… and so I just tune off and run. But, as I was approaching the Western Beef and the final turns in the Bronx, I kept hearing my name. I knew that Elizabeth and Anthony (fellow teammates) were going to wait for us in the Bronx at mile 21 but it was not mile 21 yet. So I look around and I clearly see my grandma and my cousin Nayeli. I’m a bit confused and I turn around again and I see my other cousins, aunts, and uncles and I’m so surprised. This is the part that I can’t describe; I was surprised, in euphoria, and too emotional. I began to choke a bit as I felt a sob coming on but just had to put that aside and try to finish well—I didn’t want them cheering for me on a run which could have ended worse than it did.

With that, I did make it to Manhattan in one piece. It was running down 5th Ave. that further broke me down as I took a few walking breaks due to a mixture of fatigue and pain in my leg (not necessarily cramping since that came later around mile 24). Eventually, I made my way to the end right after waving at my family who were cheering for me on 59th St.

And we're done! It was a very tough marathon, especially coming off Chicago in early October, but my heart was all in it. So even though I didn't reach my goal, I still Boston Qualified and had the most fun I ever had in a marathon. I tried to focus more on everyone who was out there cheering and calling my name. It was even better knowing how many friends were tracking me #nopressure. And when I got to mile 20 in the Bronx I saw my family there! My abuelita, my aunts and uncles, and cousins. It was so unexpected that I choked up and got teary 😭. And seeing my mom, aunt, and siblings near the end again was awesome. So a huge thank you to everyone! ❤️ And a great sign by my sister @karennhaze. #likefatherlikeson #queensdistance #tcsnycmarathon #fam #love #marathoners #seeyousoonboston

Pain. I finished the marathon cycle in a lot of pain. I have never felt that much pain in my legs after completing a marathon and I hope not to feel that again. I was trying to wait for my father but only managed to bump into Jose, Catherine, and Lori. The walk to get the poncho and exit Central Park was awful. I couldn’t move too fast and if I did it just made the pain worse. 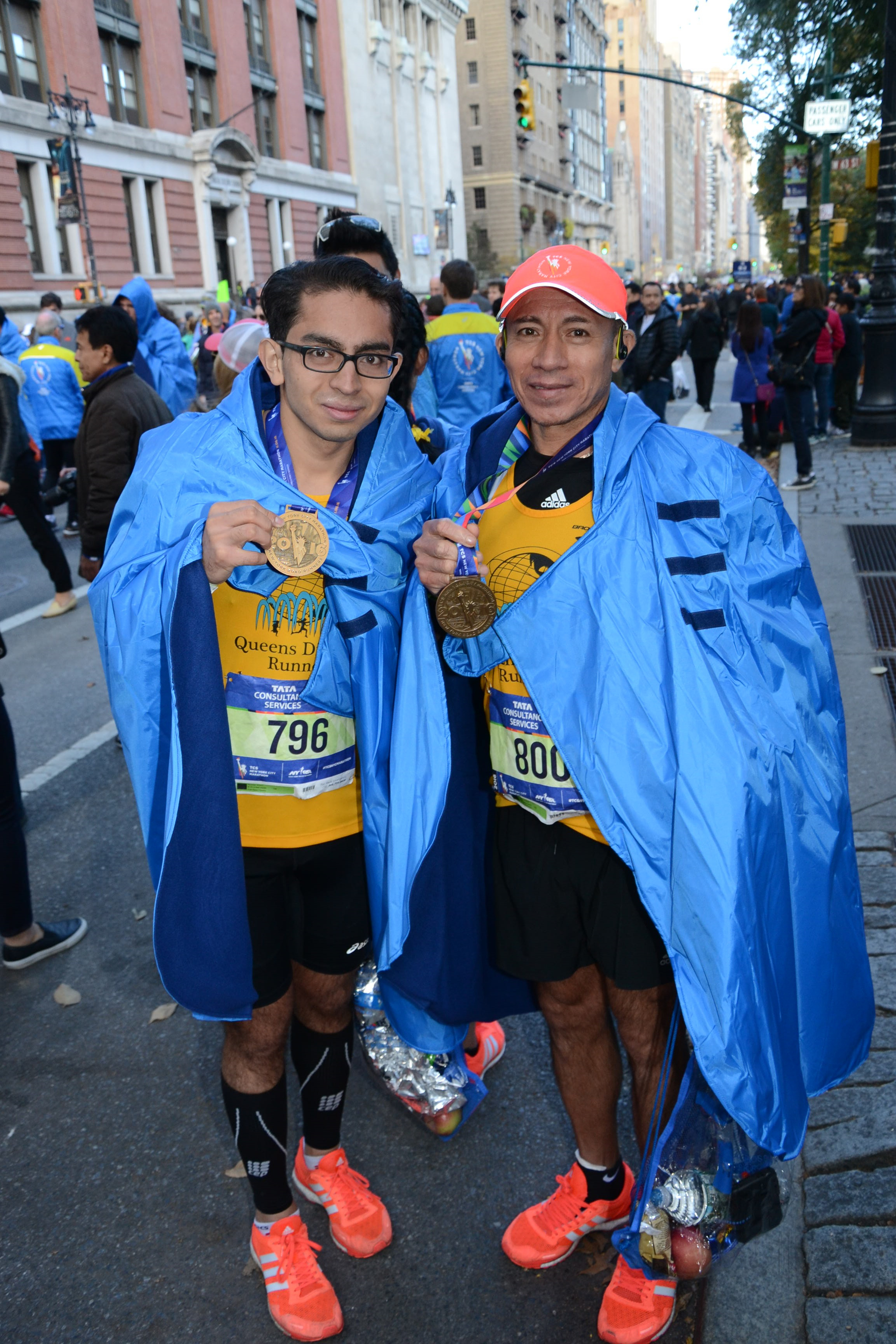 Reunited with my father after the NYC Marathon.

If you’ve gotten up to this point and are wondering about the title, so am I. I had two great marathons which other runners would love to achieve, but I am personally not satisfied with the execution. As I mentioned before, they were great times but I faded after about 20 miles into both races. What I’m truly getting at is that I’m still trying to find myself as a runner. It sounds banal but I’m just learning how competitive and how much more I want to achieve that I don’t know where I’ll stop, if at all.

Everyone learns something about themselves after running a marathon; you never really are the same after crossing the finish line. It wasn’t so much this race but the whole experience that really changed me.