It’s 4:55 AM on a cold Sunday morning as I excitedly get ready for the NYRR United Airlines NYC Half. The prospect of having a great race made me nervous the whole morning and I couldn’t keep my thoughts at bay. My father, who was about to tackle his first half marathon, and I get ready and leave, slowly running to the train station. As we exit the 59th St. station in Manhattan, the cold air sets a somber tone for the next few minutes until we meet other teammates. As we huddle together to stay warm we talk about our goals, how nervous we are, and how cold it is. It could’ve been the pre-race jitters but I was shivering quite a lot, so much that I was afraid I might have been underprepared for this race.

As it turned out, after warming up for a bit and focusing on the race to come, everything calmed down. I sort of knew what I wanted to hit but I wasn’t sure if I could it hit. This is not to say that I wasn’t confident, but I did not feel like I was in the same shape I was back in October when I hit 1:20:25 for the Grete’s Great Gallop half marathon. My goals consisted of first sub 1:21:00 and second sub 1:20:30, but Kevin (friend and coach) knew I could potentially hit sub 1:20:00 from the results of the workouts leading up to this race. It’s also worth noting that I’m focusing on 5K training and that I didn’t really consider this race as a goal race. Weeks ago I wanted to use this race to evaluate where I am in my training and fitness, but it turned out so much better than that.

My training fell into place after the Washington Heights 5K (18:05), hill training in San Francisco, and speed and tempo training a few days before the NYC Half. What helped the most was having my teammates and father around pre-race; everyone was so excited and motivated that it pushed me.

The race itself was amazing. This is my third time running this race, jumping down from 1:30:42 in 2014, to 1:24:50 in 2015, to 1:19:58 in 2016. As the race starts off I’m immersed in the surrounding, the pack of runners closing around me, the early heavy breathings, and the sound of sneakers hitting the pavement. I hit a 5:49 second mile and I back off, knowing I have to stick to the game plan and knowing that there are more treacherous hills waiting for me. As I leave Central Park at mile 6, I start to feel it - a sluggish feeling overcoming me and slightly slowing me down. It was at this point that I actually wanted to speed up. So I opened a gel at this point and started a slow intake.

This next part of the race is always amazing. Running down to Times Square and then turning to the West Side Highway is filled with cheers, cameras, and so much excitement that you can’t help but go faster. But… it was at this point that the wind started to pick up, and even though you are expecting it, it still hits you hard. Then I did something stupid around mile 9 and took in another bite of energy gel and water at the same time, causing me to choke for about 5 seconds until I recovered and was able to catch my breath. It’s an odd feeling when you’re running and think you should probably stop because it could be a serious issue, but your legs just keep on moving, sometimes even faster as if that would make the pain go away faster. (This same situation happened at the 60K when, before starting the last loop around Central Park, I took in too much water and choked. That time I did stop to recover - ultras aren’t easy!) 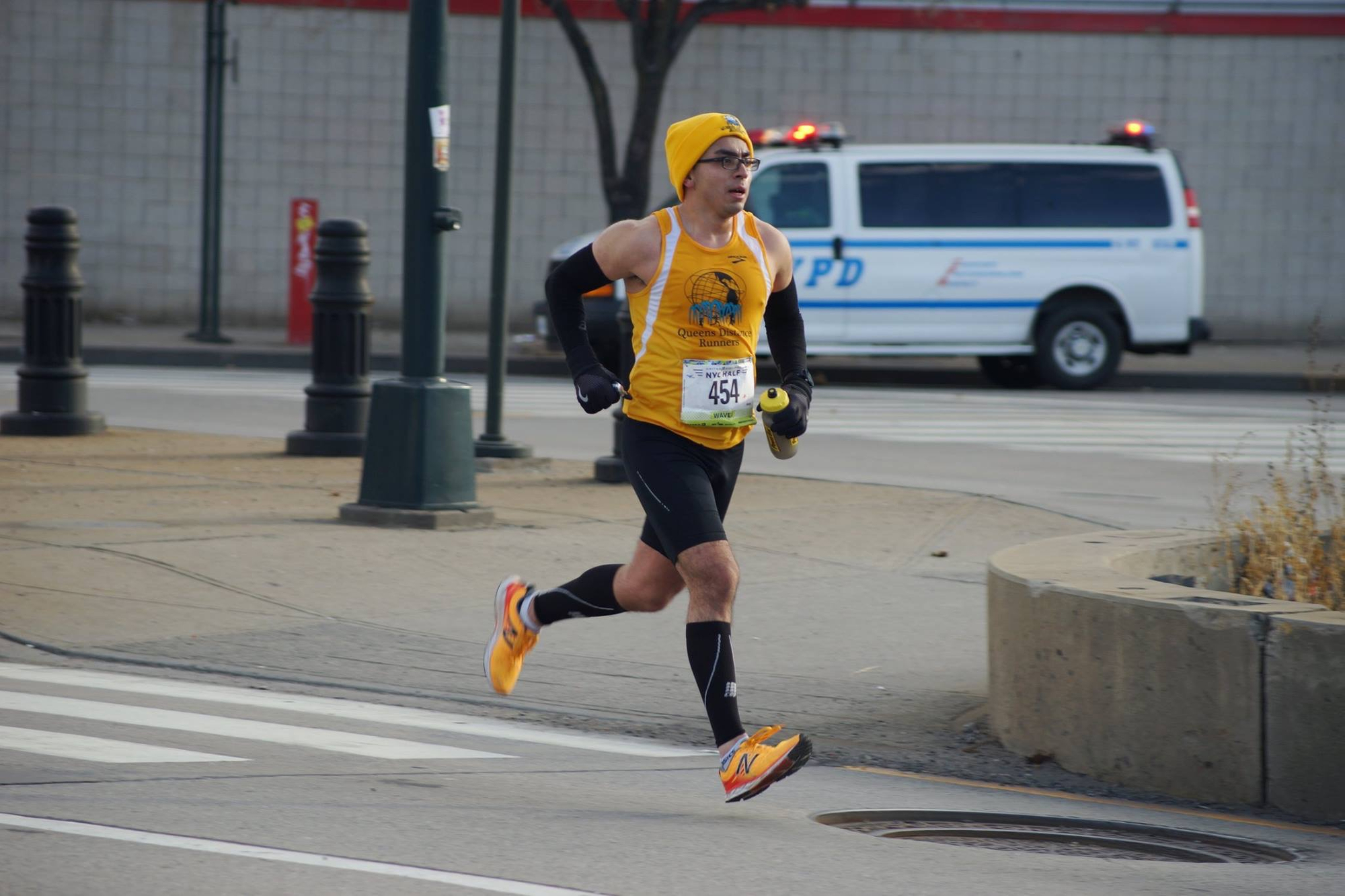 Running on the West Side Highway. Photo by Jared Mestre of Hellgate Road Runners.

Focus. I pushed all those thoughts aside and just kept going. It was around this point that my mind started to wander off and I just thought about catching up to the runner in front of me and passing him, and then the next runner, and so on. It wasn’t until mile 11.5 or so that I saw the 1:20:00 pacer and group! So I slowly speed up trying to catch this group and I managed to reach them right before the 12th mile. I thought about sticking with them the whole way and hitting sub 1:20 in that manner, but what if the pacer was off? And, more importantly, am I really pushing myself as much as I possibly can? Definitely not. I decided to just fly away, picking up speed as I pass the last water station and a volunteer yells, “GO QUEENS DISTANCE!”, and picking up even more speed as I head into the tunnel and last mile. I felt like I was cruising in the tunnel, easily maintaining a high speed which only encouraged me to go faster… and then we exit the tunnel. That last uphill at the exit may be small but it can quickly drain you. Not only does it slow you down, but it makes it that much harder to pick up speed again. 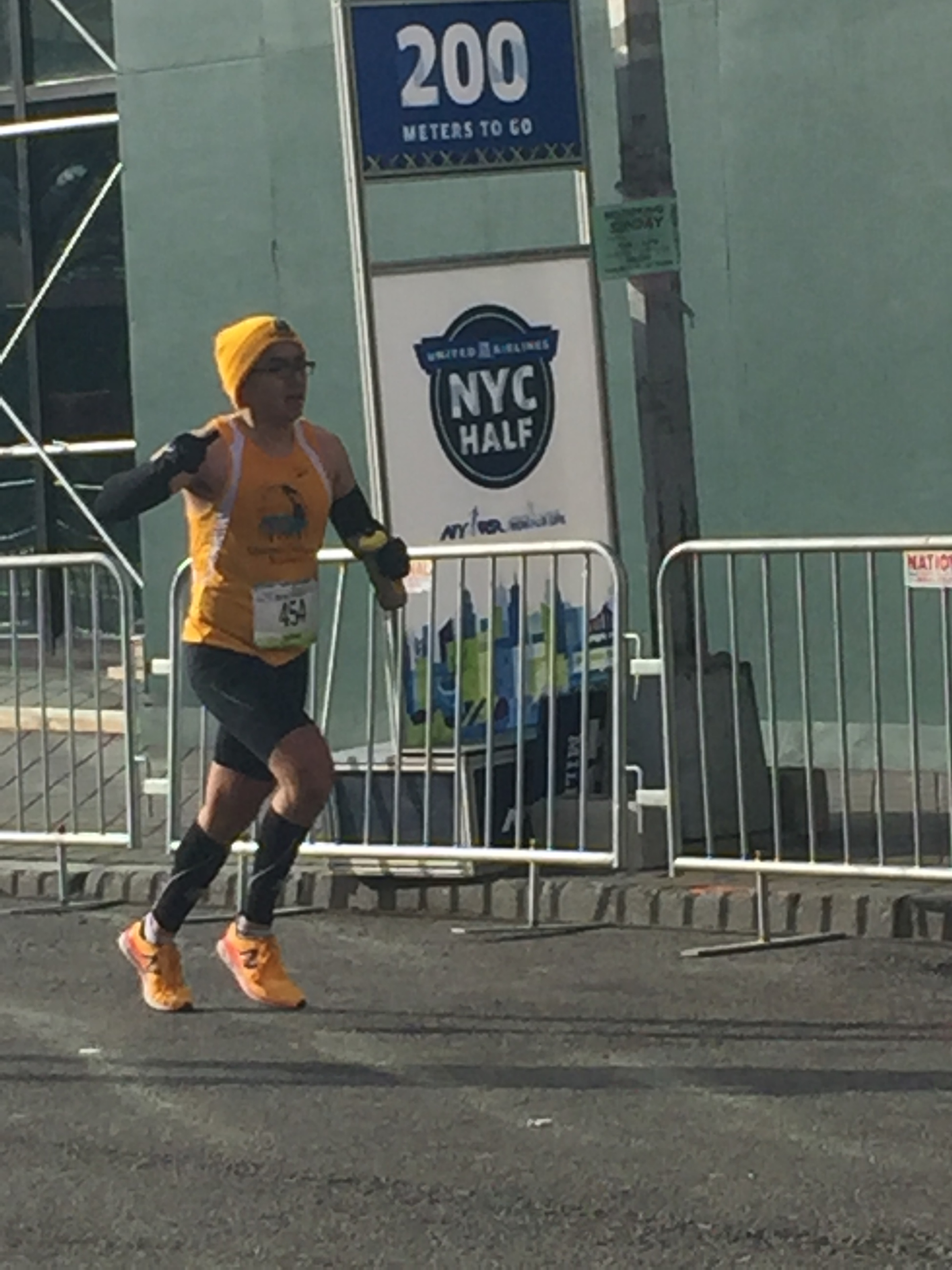 600 meters to go and I pick it up again. 400 meters to go and it’s only one lap of a track, right? 200 meters to go and I see and hear my family cheering for me. This last part was the most painful and disappointing part simply because I could not kick as hard as I wanted to, but I probably went just as fast and didn’t notice. The time on the clock read 1:20:— with about 15 seconds or so. As it was pointed out, the sigh of relief after finishing was real.

Unofficial time? 1:20:02. Much faster than expected and better than if I stayed with the pacer. It actually wasn’t until later when fellow teammate Marie messaged me that the times were updated, and those 3 annoying seconds which would’ve haunted me and kept me up at night, turned into 2 seconds under 1:20. It’s amazing and I’ve just hit a huge milestone in my training, but I don’t think I’ve quite let that sink in yet. It’s not exactly disbelief, but I just can’t describe this feeling.

My father had an amazing half marathon debut in 1:33:30 and I’m ecstatic for him. Perhaps he’ll run the Queens Marathon or maybe even the NYC Marathon---I can’t wait to see what he does next! 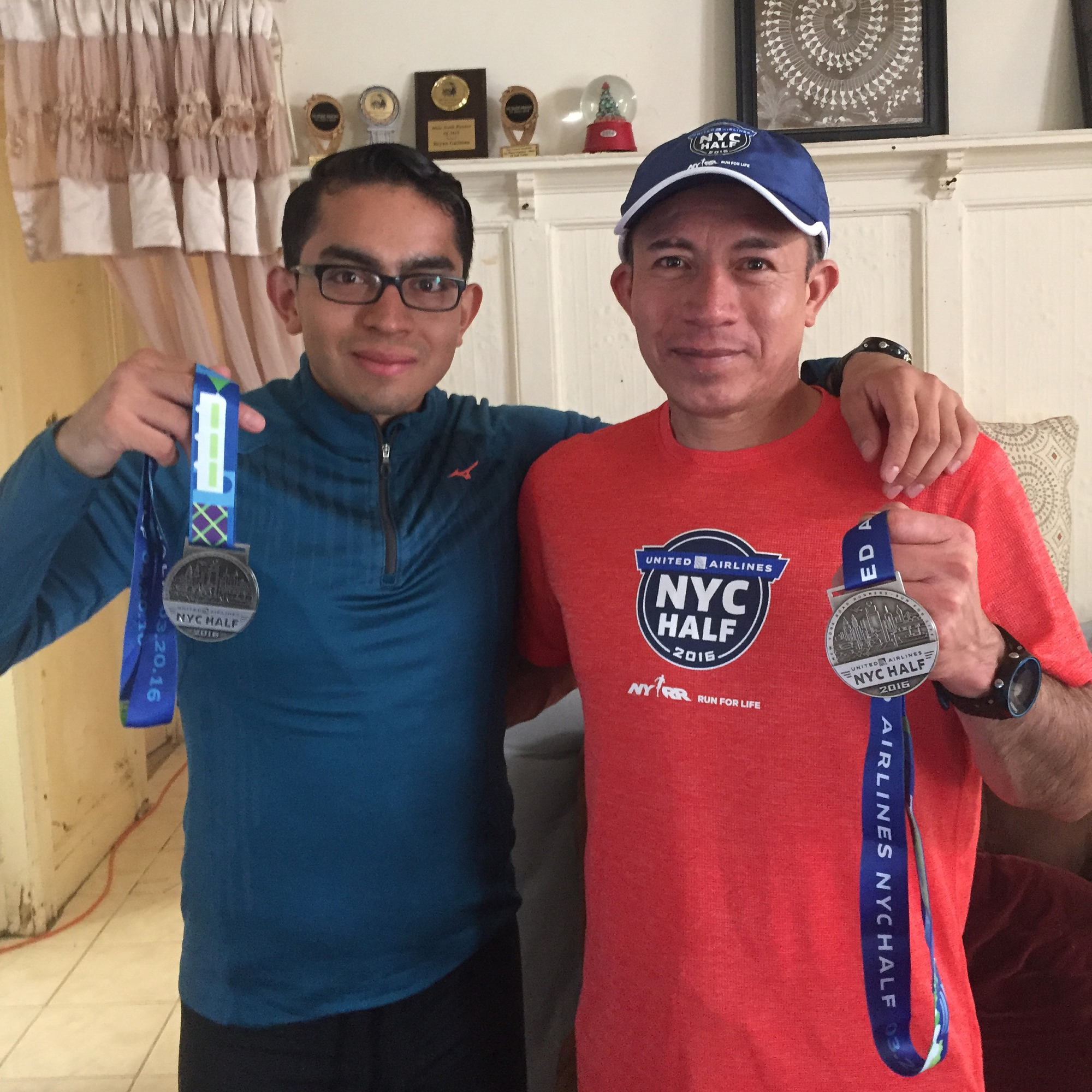 Post-race with my father.

I can’t think of a better way to start this running blog post series.