The past few months have been crazy and I’m still trying to process and understand it all. I will write another blog post to try and summarize the past few months, but for now I’ll discuss the four minutes and fifty six seconds it took to get a new PR at the NYRR New Balance 5th Ave Mile.

The Chicago Marathon is about a month away. Kevin’s training has been focused on both speed and middle distances. With that said, running about 55 to 60 miles a week has gotten me stronger, leaner, and healthier but it has not necessarily led me down the speedster path. While the week leading up to the mile race was focused on tuning the speed endurance for the mile, I wasn’t in high hopes to run a fast mile. I was hoping to make a new personal best (5:06 previously), of course, but I wasn’t sure if I could break the five minute barrier. I was still running high mileage and not tapering for this race, but I understood that the marathon is my main goal.

I was calm before the race but once the race started I got nervous. The younger age group heats went before me and as I was cheering for them I constantly kept looking at my watch to keep track of time. After my warmup I lined up with Nate, who was a few feet away, Kevin, who decided to live-feed his mile run, and Jose, who told me before the race he was going for 4:40 with 70 second splits per quarter mile.

Fantastic. Everyone has a plan and I’ll stick with mine but I’ll try to keep Jose and Nate in my sights. About ten seconds to go and everyone has their right hand on their left wrist ready to start their watch. We’re off and it’s exhilarating.

First quarter mile featured a slight downhill. It was about 70 or 71 seconds of a steady sprint and I kept thinking how easy it felt. I was so surprised because it’s usually hard for me to hit that time and pace in training. Second quarter comes and I believe I saw 2:28/2:27 on the clock. I was on pace for a sub 5 minute mile and the thought of that happening midrace pumped me up. At this point there were already many runners breathing hard and slowing down. This makes sense because the second quarter was on an uphill. After recovering on the uphill came a downhill for the third quarter. I vaguely remember this part except that I pushed harder because of the downhill. It turned out, after looking at my race on Garmin, that this quarter was actually my slowest!

The last quarter was amazing. I quickly glanced at the clock on the road and read around 3:43, meaning that I had the sub 5 minute goal within reach.

The 3/4 of a mile mark was also the location where my team held the cheer station and they were loud. Screams and cheers motivated me to push and go faster. About 200 meters to go and I put in my final kick until the end. I cross the finished line, didn’t stop my watch, and tried to absorb what had just happened. I didn’t know the official time yet but I knew it was 4:55 or 4:56. 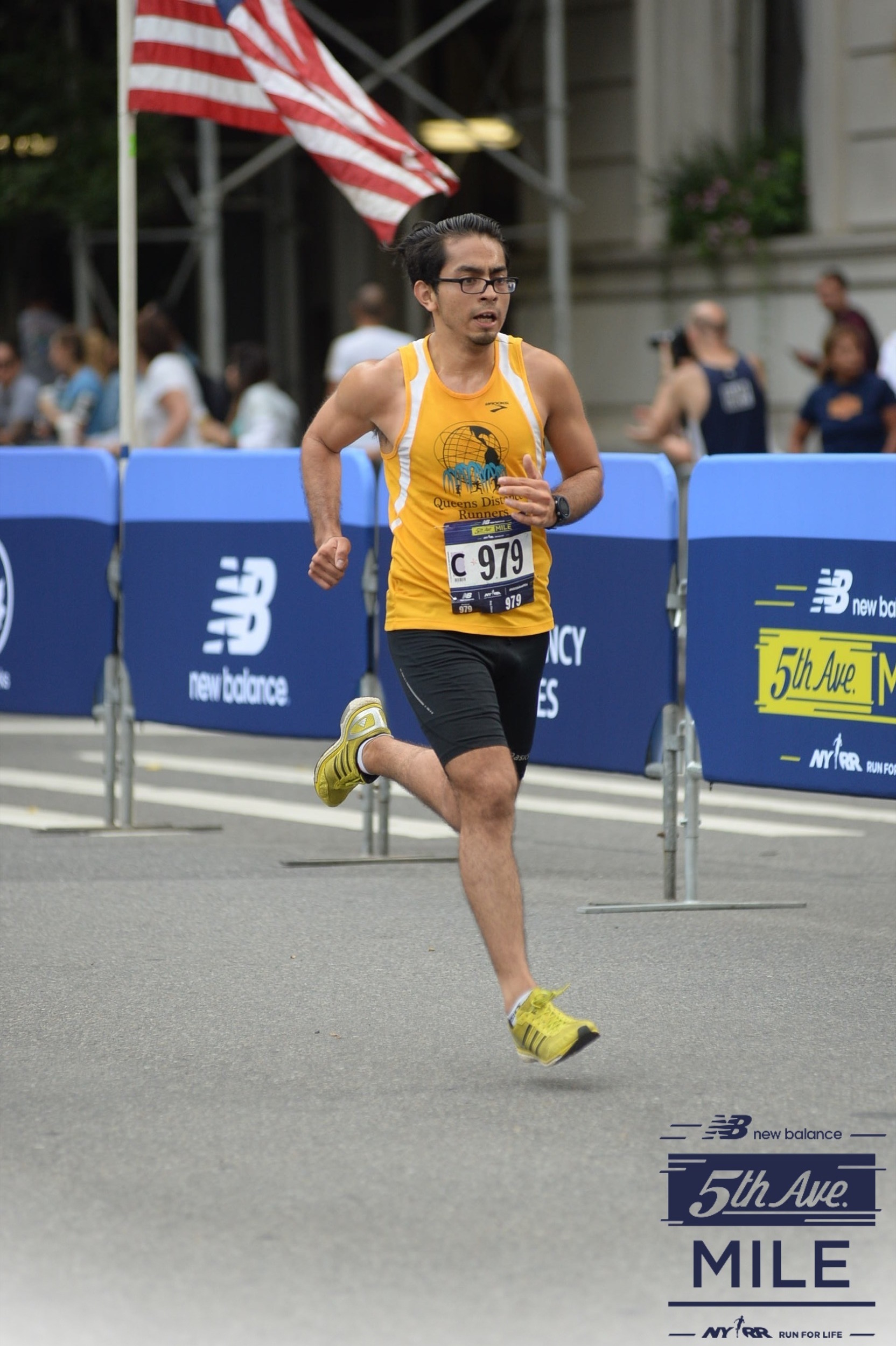 Photo courtesy of NYRR and Gameface.

I did not spend the past few months training hard to settle for anything less than the best I could do. The training since then have significantly changed. While training I now think, “I ran 4:56 for the mile, I can push harder”. And so far that’s exactly what I’ve done. I’m still the same person but with a different mentality about myself; and so a different person.

Spending this race with my family and team meant a lot. We cheered each other on and we stayed for the whole event to watch the professionals. My father ran a fast mile in 5:34 and is doing so well in his age group. Bryan impressed himself with a 6:01 mile. He was really ecstatic about his time, but like I told him, I knew he was capable of running that fast. This race proved what believing in yourself can lead to.

6:01, 4:56, and 5:34 unofficial times for us at the New Balance 5th Ave Mile. Still the fastest but my brother and father are catching up too quickly! #queensdistance #nb5thavemile #mile #qdr #fam #sub5minutes #finally


Regarding training the week leading up to race: there were two workouts that helped fine-tune the legs for the mile race.

It’s interesting to note that I never hit sub 2:30 for 800 meters in training and Kevin was surprised by how well I did. I guess by his estimations of the training, he expected around 4:59 to 5:01. Always setting the bar high.