I’m overwhelmed and my heart is beginning to race as the plane prepares to take off. I then grin as I see my siblings’ excited and nervous faces as we lift off; and with that we are off to Chicago! I went to Chicago for the marathon and came back with a new marathon personal best. Best of all, my teammates and siblings were there to enjoy the city of Chicago and our journey to another 26.2 mile race.

Great first day in Chicago! It was my sibling's first time on a plane and seeing their faces during take off was wonderful. Glad to be with them and my teammates in a new city, sight seeing and getting ready for Sunday. #family #chicago #chicagomarathon


When people ask me about the Chicago Marathon and the trip, I don’t know how to articulate everything I went through—there was a lot going on and it all went by fast. The trip and marathong were amazing experiences and I try not to look at the negatives too critically, but there were bumps along the way. So let’s start from the beginning.

It’s hard to plan family trips but I really wanted my siblings to go with me to Chicago, not just for their support, but because it would be their first time flying to a different city. Perhaps we walked around being tourist for too long and that wasn’t a smart move, but it was fun checking out the Willis Tower, the Chicago Marathon Expo, the local pizza and hotdog venues, the Jordan store, the bridges, Wrigley Field, and the bean at Gateway Park. They are older now and they can (more or less) take care of themselves, but I still worried when they went out alone!

Maria and Bryan ran the Chicago International 5K and that was an exciting prelude to the marathon. It was a chilly morning and Bryan was a bit nervous about this race. He wasn’t sure how fast he would run, considering he barely trained for the race, but had a good race plan in mind. He didn’t go out too fast and even though he was smiling at mile 2, he was suffering. 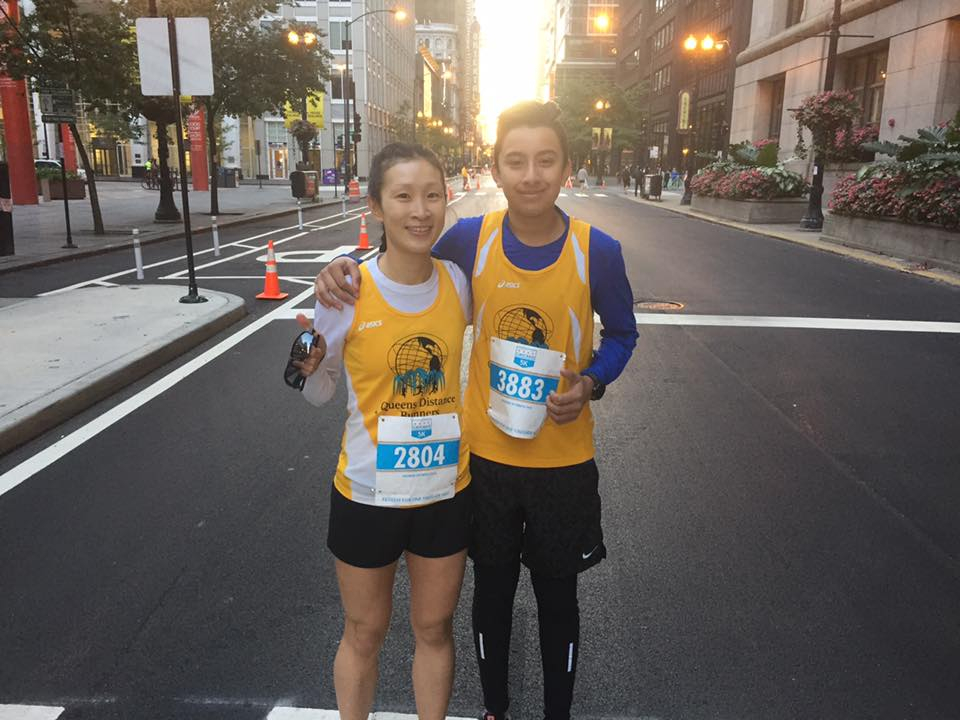 Maria and Bryan at the Chicago International 5K.

But, as you can tell, Bryan had a fun time; something we sometimes forget to do on race day.

We had a large team dinner the night before the race which was fantastic. There were eight runners from our team, one who is not part of our team (yet), and many family members eating pasta and bread. It was a good time and that helped ease the nerves.

The morning of the race, my siblings and I rode to the starting area. There were a couple of last minute details I was bothered with:

Before the start of the Chicago Marathon. Being dropped off by my siblings was great and really helped me pushed when I needed it the most towards the end of the race. #queensdistance #chicagomarathon #siblings #26point2


The best part of the morning was the awkward and loving goodbye from my siblings.

I was ready for this race. I wasn’t mentally ready for a 2:47:00 to 2:50:00 marathon time though. Whoa, 2:47?! According to my NYRR Bronx 10 Mile time of 58:47, some race predictors said I could run around 2:47:00… but like I said, I wasn’t too mentally ready for that. Perhaps that’s not the best way to put it. I was confident in my training but jumping from 2:59 to 2:47 is a big deal and not having run that fast for that long before, I was wary. Thankfully, Luciano helped ease that thought away by explaining how he himself did it. It was possible, but could I do it?

I wanted it and I was going to go for it. If there’s anything I learned from this marathon it’s to really let go of your fear and just go for it. It sounds cliche but if you fail, you can try again, and if you succeed, then more power to you.

With that in mind, I start off running at a very comfortable pace, knowing very well that it was only because it was just the beginning. We ran the first few miles of the course a few days prior so we knew that the GPS signal would be off and I therefore had to mentally track my pace. Turns out that I paced it well for the first 5K but then went too fast for the second 5K. After that, everything was very steady. 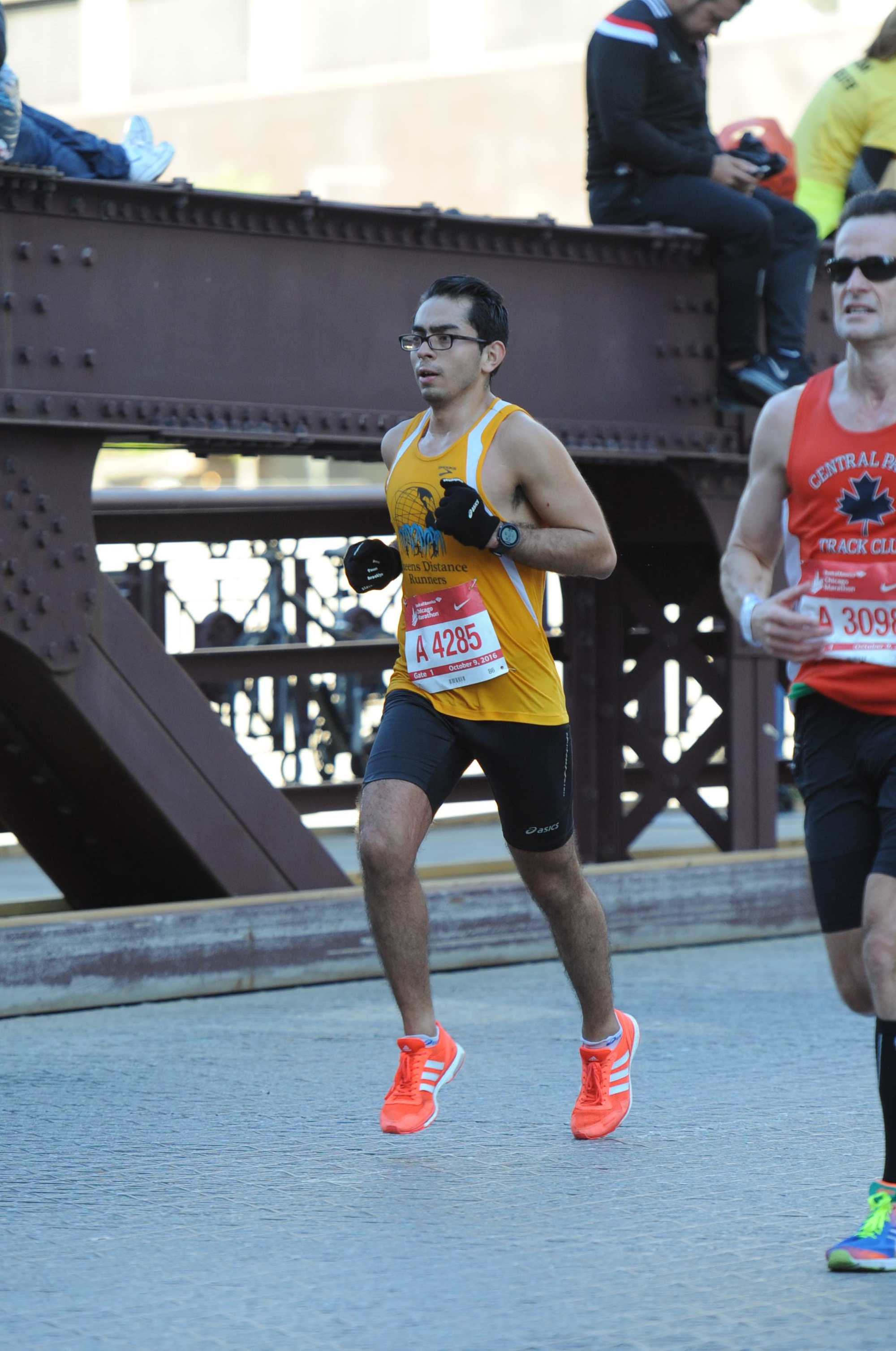 Middle of the race.

The first 30 kilometers was perfect. Then, as I approached mile 20 in around 2:07:00, I began to feel a tightness in my right calf. I can’t sure exactly what the reason was but I don’t think I drank enough water or took in enough gels—in fact I took in only one gel around mile 20. I was afraid of getting a stomach cramp and instead ended up getting a bad leg cramp. It was dissapointing approaching mile 23 and having to take short walking breaks to ease up the legs and then continue. Worst of all, I approached mile 26 and my right hamstring completely pulled. I couldn’t walk without pain and just had to completely stop. I massaged really well and just thought about finishing—I WAS SO CLOSE! And as I was walking to ease up the cramp I kept hearing my name.

When you’re that far into a marathon, it’s hard to really think straight. It’s not like the halfway point where you can see your family standing by cheering for you. I couldn’t manage to look around to see who was cheering me on and that’s fine; I just looked ahead to the finish line and kept running. 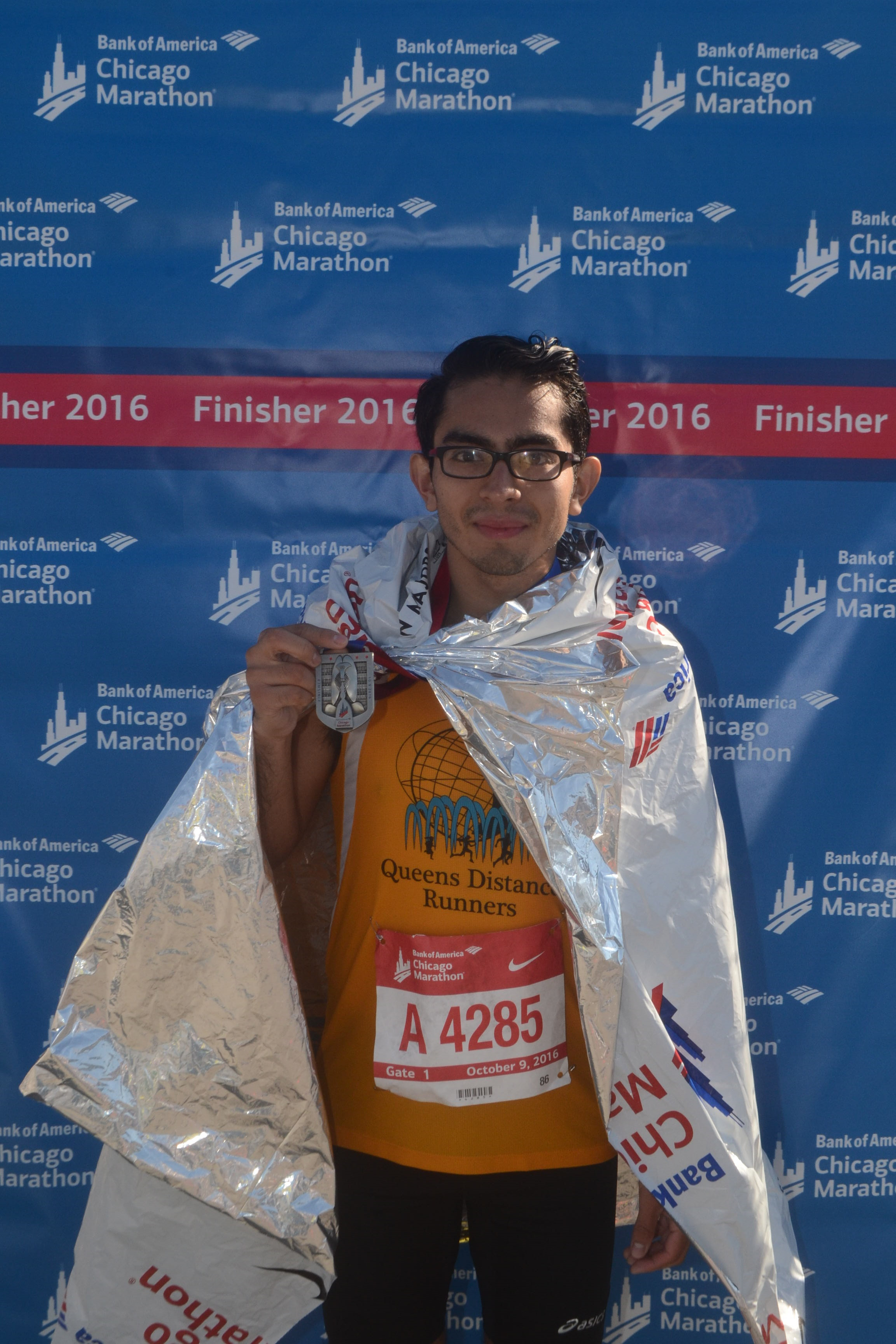 I may have failed to reach my initial goal of 2:55 but I still went through it all with a new personal best. When people mention the PR they are excited, but I can’t get too excited about it. I’m not succumbing to the negativity of a bad race, but it’s more about thinking of this race as a step towards a better race. I’m happy with the PR but know I can do so much better and right now that’s the drive I need. The Chicago Marathon went perfectly well for 20 miles or so and it’s that effort that will help towards racing the NYC Marathon (but that’s a different story!).

Would I run Chicago again? Yes. Will I run it next year? Perhaps. I’m not too sure what 2017 will bring but I do know that for the Boston Marathon I will have my siblings, teammates, and now my parents—MY DAD BOSTON QUALIFIED!—supporting me. Love paves the way.